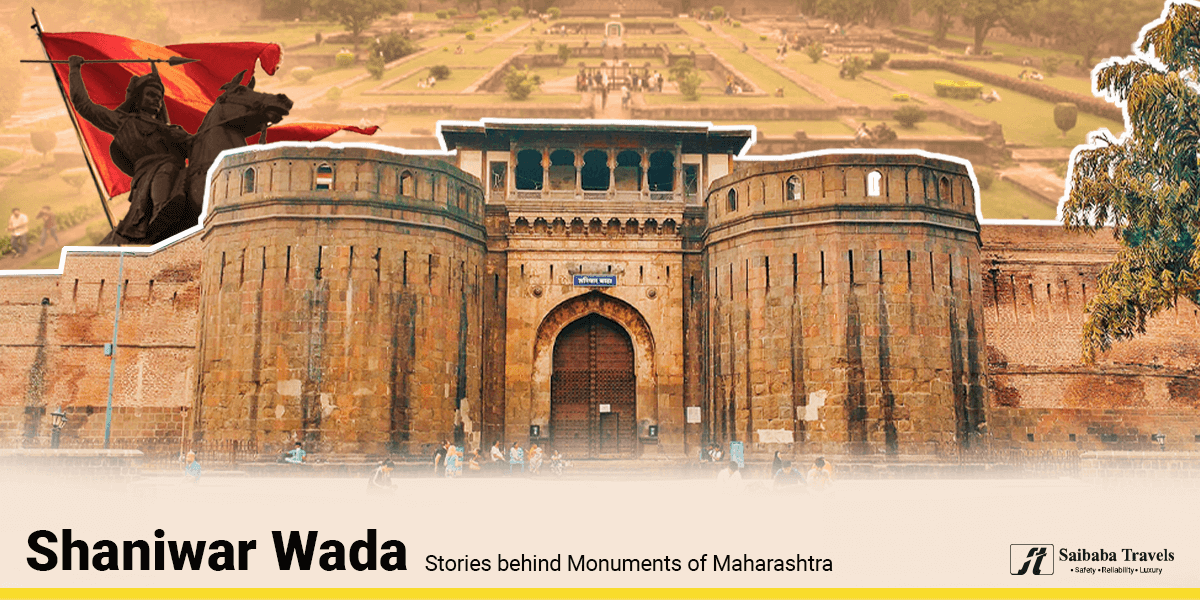 It is always said that calls from the past will knock back someday, bells from the long-gone times will ring again for stories so legendary never fade away. Sounds familiar?

Yes, it is the one monument in this beautiful land of Maharashtra that has a thousand incidents shouting to be the legendary pages of history for centuries now.

Shaniwarwada holds more chronicles than any other monument in the state. Situated in Pune and built nearly 3 centuries ago, it now stands as the heart of the city as it was the monument’s primary role to be. Let’s hop in the fort and see what’s around those pillars.

The Construction of the monument began in 1730 C.E and was completed by 1732 C.E. The first owner who commenced the building was the brave warrior and prime minister of King Shahu Maharaj, Peshwa Bajirao I. Peshwa Bajirao built Shaniwarwada as his capital in Pune serving the primary reason to be a residential building to the Peshwa’s family and closed ones. It was one of the grandest buildings of the time.

With time, the building lost its shine with too many hits and conspiracies against the Maratha empire. The Marathas reigned the priceless building until 1818, after which it became the property of the British East India Company. The Marathas lost Shaniwarwada and all of their land and kingdom to the Britishers in the third Anglo-Maratha war which took place in 1817.

After losing the war, the throne holder of Shaniwarwada Bajirao II was sent to prison in Bithoor near the city of Kanpur, Uttar Pradesh. Then a horrifying event took place inside the walls of the building leaving everything except the outer stone walls burnt to ashes. All the pieces reminding of history held inside those walls were taken away by the fire that lasted almost 7 days consistently.

Another famous story which is still spoken by the locals is a truth yet uncertain. In 1773, the owner of the building who sat on the Peshwa throne was Narayanrao. In the dark of the night, the Peshwa was assassinated by his uncle and aunt. Locals speak of calls coming from inside the fort at night, saying “Kaka Mala Vachwa”(Uncle, Save me). However the truth is still unknown, this story highly influences the locals nearby.

The first stone of the building of Shaniwarwada was kept by Peshwa Bajirao I on Saturday, 10 January 1730. Hence the name fell; as ‘Shaniwar’ which means Saturday in Marathi. The building was predefined to be built completely by stones. But due to opposing subjects saying only the King should have a fully stone-built residence, the construction plan was changed.

Only the first floor was stone-built and the rest 6 storeys were made of brick and mud. When the British artillery first attacked the building all the six floors collapsed to the ground leaving the building of one floor only, till date.

The complete construction used majorly three elements, Teak from the jungles of Junnar, Stone from Chinchwad and Lime from Jejuri. The design and architecture of the building were completed by Kumawak Kshatriya from Rajasthan. After the building was opened for residentials to move in, the Peshwas titled Kumawak as ‘Naik’

There are many entrances and exits to the building, but the main door made of iron and stone faces north, which signifies the Peshwa’s ambition over the Mughal empire in Delhi. Other doors like the Mastani Darwaja, Khidki Drawaja are also famous.

The building was a magnificent piece of architecture and the walls still remind of it presently. No matter how many blows this monument takes up, it remains grand and appears princely just like the reign of the Maratha Empire.

Stories behind Monuments of Maharashtra: Gateway of India