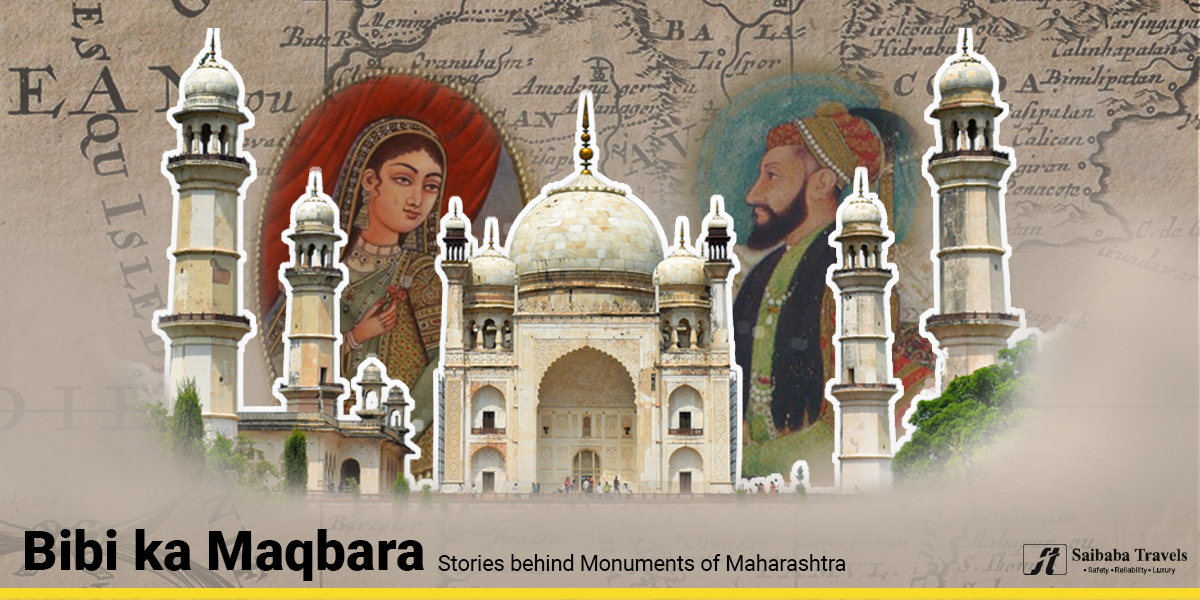 The stories of the building of this aesthetically elegant tomb go back hundreds of years ago to the 16th century. It was the time of historical markings on the Indian lands when Emperor Akbar’s reign was at its end and the Mughal family was on the verge of decline. Bibi ka Maqbara or the ‘pearl mosque’ is also considered as the last architectural beauty by Mughals on Indian lands.

Every beautiful piece of art has an epic story behind its walls hidden among the pillars of design and emotion. Let’s get behind the walls of this one and find out everything that led to the making of this monument.

After the reign of king Shahjahan, his son Aurangzeb took over the royal offerings. His reign was meant to be cruel but he had immense love for his first and chief wife, Dilras Banu Begum. Dilras Begum was the daughter of Mirza Safavi who was then in charge of Gujrat province in the Mughal empire. Dilras married Emperor Aurangzeb on 8 May 1637 in Agra. It was the same year when Aurangzeb took his vows for capturing the kingdom.

Dilras (also known as Rabia) and Aurangzeb had two sons and three daughters. The queen took her last breath after a month from when her fifth child was born. The infant was named Akbar and his eldest sister took great care in Akbar’s upbringing. However, the passing away of the most beloved wife was overwhelming for the family especially, the king.

Hence, he decided to make a symbol of love and respect in the memory of his late wife. This symbol was called Bibi ka Maqbara meaning the tomb of the lady. It was very similar to the iconic Taj Mahal which was built by Aurangzeb’s father, Shahjahan in the memory of his mother Mumtaz Mahal.

In the huge mausoleum in Aurangabad, rests late Dilras Begum under the name of Rabia-Ud Duarani (Rabia of the age). The tomb was later repaired and beautified by the queen’s eldest son, Azam shah under Aurangzeb’s permission.

The Tomb was known to be built between 1668 and 1669 C.E by the king according to the Muslim Taarikh Namah. Aurangzeb was willing to build the mausoleum in incompetence with the great Taj Mahal. Unfortunately, the architecture and strict budgets allocated by the king, the latter was considered of no competition. However, the intrications on the inside and ceilings still hold a special place in the hearts of the tourists.

It is known that the tomb was built for about Rs.68 lakh. The king allotted a budget of 70 lakhs for it. However, it was much lower than needed. Hence the low budget stands as one major reason for the lack of proportion and comparison to Taj Mahal.

The white marble used in the building of this mausoleum was imported from Jaipur. Hundreds of ox carts were used for the transportation of material. Indeed, people crossed boundaries for love and art in history too.

Outside the Mosque, the architecture name and qualification is mentioned for people to get to know the monument more closely. The architect and engineer of Bibi ka Maqbara was called Ata- Ullah.

There are numerous beautiful arches inside the monument and this monument leaves no effort to make you jump backwards and taste vintage.

As much as it has an intriguing history, its scenic beauty at dawn is equally mesmerizing and impressive. This Monument stands with pride amidst Aurangabad. Come, take a look!

Check out our blogs :

Exploring the street food of Maharashtra