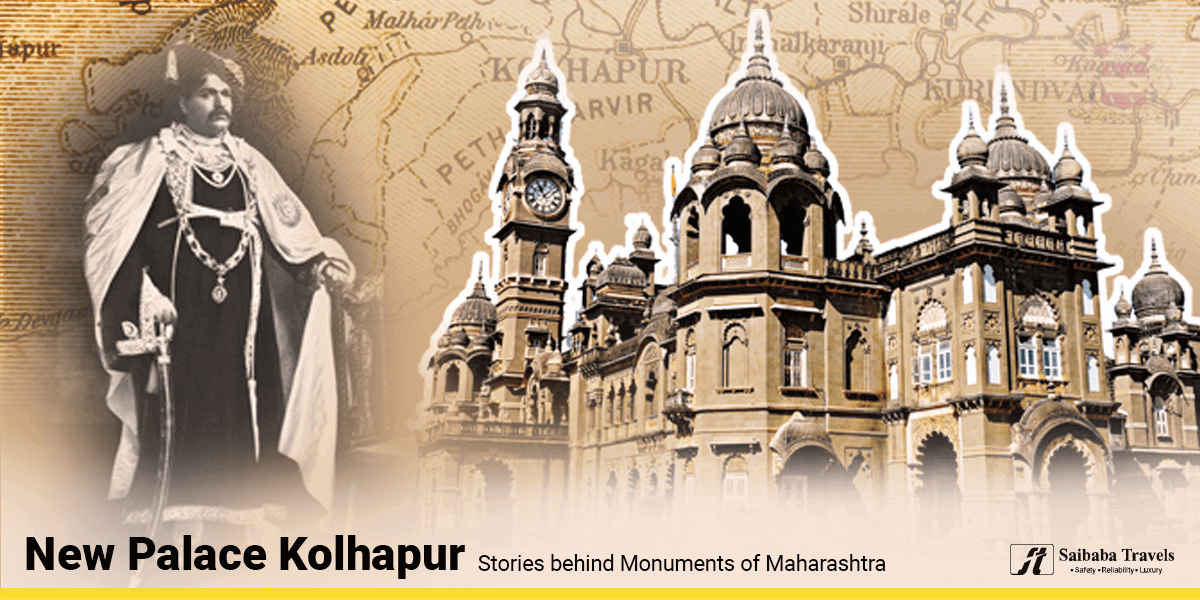 It stands still. It burns in the flames of the past. It is built by the stones of sharp victory. It is the symbol of people believing in monarchy and monarchy believing in righteousness.

The New palace of Kolhapur is one of the strongest pillars of trust and belief in the kinship of the Maratha Empire. This palace was built in the reign of Rajarshi Shahu Maharaj. It is considered as a modern-day monument as none of the parts of the palace had any severe damage. Still preserved by the Archaeological Survey of India, you are free to roam around the halls of the palace. Let’s take a tour of it and unravel how it came into being.

The New Palace was formerly called the Shahu Maharaj Palace. The palace took seven years for construction from 1877 to 1884. Black polished stone was used for the construction of the entire mainframe of the palace. The palace is eight-angled with towers on all corners of the building. The oldest tower had a clock embedded into it in 1877 and till date is unreplaced.

A humongous Darbar hall was built for the meetings of Chhatrapati, his ministers and subjects. At the end of the Darbar Hall, a raised throne was built, decorated in gold and royal velvet. The complete palace served as the luxurious residence of the royal family.

The palace sees a large influential architecture by neo-Mughal Arches and temple-like brackets all around itself. The darbar hall is double height and comprises huge glass screens which are illustrated by the incidents of Chatrapati Shivaji’s life.

Back in the times when hunting was a sport, the kings collected animal skins and preserved them as a part of an achievement collection. The palace witnessed many such collections.

Chatrapati Shahu Maharaj was the first ruler of the Maratha empire to reside in the palace. Also known as Rajarshi Shahu Maharaj, he was one of the rare beloved rulers. He became the first Maharaja of the princely state of Kolhapur. The Maharaja was born to Yeshwantrao Ghatge in Kagal Village of Kolhapur. After being brought up by his father until he was 10 years old, Queen Anandibai, Wife of King Shivaji IV adopted him. Being a teenager, wrestling as a sport allured young Shahu the most.

Shahu Maharaj was a just ruler and worked in the rights of people. He was greatly influenced by Savitribai Phule, a woman reformer working for education for girls. Chatrapati Shahu Maharaj ruled for 28 years from 1894 to 1922. In his reign, he started many social reforms out of which the Vedokta controversy became most popular, which started in the favour of non-brahmin rights.

The ruler was succeeded by his eldest son, Rajaram III. The kingdom began to decline and the social reforms started by Rajarshi faded due to lack of consistency in continuing the legacy.

The palace is conserved and presented to the local public and tourists as a historical attraction. The ground floor is converted into the Shahu Maharaj Museum. It showcases the clothes, weapons, testimonials, from the royal family.

The museum also keeps in display the hunting hobby of kings of the Maratha Empire. The collection includes stuffed tigers, tiger heads, blackbuck, bears, Himalayan black bear, black panther, wild boar and several deer varieties. Some letters from the British viceroy during the time of freedom struggle are also kept in the display.

The outskirts of the palace are converted into a zoo, complemented with a huge pond.

The palace is a clear example of denial of the statement, “ beauty fades away with time.” There might be a huge difference in the past and present-day palace. Time will always do its tricks. But some structures along with beauty hold the integrity of strength. And one such structure is the new palace of Kolhapur.

Stories behind Monuments of Maharashtra: Gateway of India